Sir Finley Mrrgglton is a hero that the player can pick in the Battlegrounds game mode. 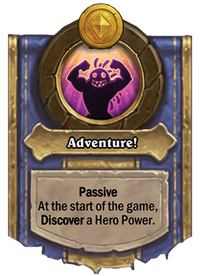 Sir Finley is basically a hero reroll; pick him if your other options are undesirable.

Since he gets to pick a Hero Power after all players have chosen their heroes, it gives him a slight tactical advantage in determining which Hero Power to select. For example, if there's a Nefarian in the game, you might want to avoid picking George's Boon of Light.