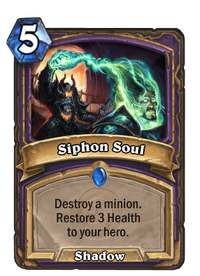 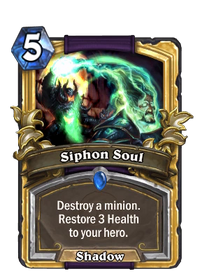 Destroy a minion. Restore 3 Health to your hero.

You probably should avoid siphoning your own soul. You might create some kind of weird infinite loop.

Siphon Soul is a rare warlock spell card, from the Classic set. It destroys a minion and restores health to the warlock.

Siphon Soul is the warlock's answer to the healthiest or most powerful enemies. Similar to Assassinate for rogues, it is the warlock's simple and certain removal spell. Its added bonus of a 3 heal designs it specifically for warlocks and their tendency to hurt themselves. It also has the versatility of targeting your own minions, useful to trigger deathrattles (eg. Abomination) or if the minion is going to die within the next turn, such as due to Power Overwhelming. There is no downside to this card besides its somewhat hefty 6 mana cost. As a straight up removal effect it bypasses Divine Shields.

Siphon Soul is likely based on the old Affliction talents Siphon Life and Soul Siphon in World of Warcraft (these are no longer in the game). The concept of soul draining is a common theme for warlocks. Drain Life and Drain Soul are two such spells. Affliction warlocks specialise in draining spells, and are able to capture the souls of their victims in Soul Shards, which can then be consumed in order to empower even further their already formidable abilities. 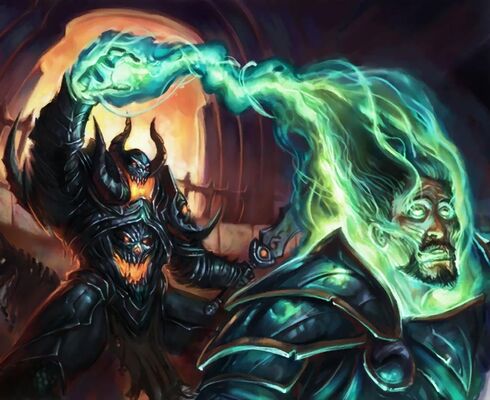