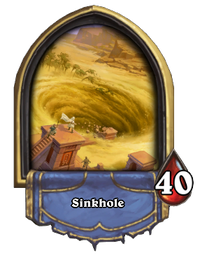 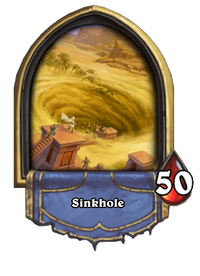 The best way to avoid a sinkhole is to - oh, too late.

Sinkhole is a boss that can be encountered in Chapter 1 of Tombs of Terror.

Reno Jackson
Whatever you do, save the treasure from sinking!
Sir Finley
"Sir Finley of the Sands" was not to be taken literally!
Elise Starseeker
Uldum's natural threats are almost as dangerous as the supernatural ones.
Brann Bronzebeard
Grab a rope, everything's sinkin'!

Sinkhole is unique to Hearthstone.