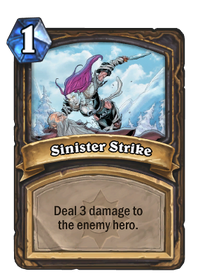 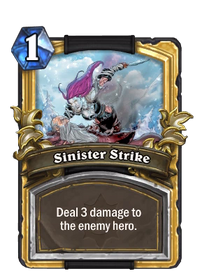 Deal 3 damage to the enemy hero.

There's something about this strike that just feels off. Sinister, even.

Sinister Strike is a rogue spell card, from the Basic set.

Two copies of Sinister Strike are automatically included in all players' collections upon unlocking the rogue class.

Two Golden copies of Sinister Strike are a reward for raising a rogue to levels 15 and 20.

Sinister Strike is uncraftable and cannot be crafted or disenchanted.

Sinister Strike allows you to trade card advantage to deal extra damage to your opponent. With a low mana cost of 1, it can be an effective tool for ending the game in the later game by starting the execution of a lethal combo but is a poor choice to play early in the game as it can only target your opponent's hero.

Sinister Strike is most useful in combination with Gadgetzan Auctioneer or cards with Combo effects. Malygos can also turn it into a devastating 8 damage for just 1 mana, enabling you to play one Sinister Strike in the same turn. Outside of these combos it is generally a poor card, due to its low value.

"It adds injury to insult."

Sinister Strike is a basic rogue ability from World of Warcraft which consumes a large amount of energy to deal a substantial amount of direct damage.