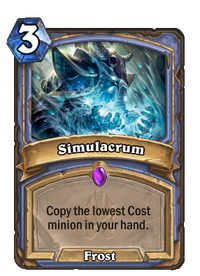 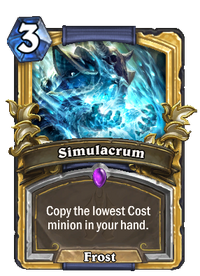 Copy the lowest Cost minion in your hand.

Simulacrum is an epic mage spell card, from the Knights of the Frozen Throne set.

Simulacrum can be obtained through Knights of the Frozen Throne card packs, or through crafting.

Simulacrum works well in Quest Mage, where it can be used to get an additional copy of Sorcerer's Apprentice. In addition, it plays really well with cards that reduce their cost on their own like Nerubian Prophet or Arcane Giant as they need less effort to power up the effect of this card. With the introduction of Kobolds and Catacombs, you can now play Exodia without Quest, using two Simulacrum on a Sorcerer's Apprentice and then playing Leyline Manipulator, which makes the two new Apprentices free. When you have ten mana, play Archmage Antonidas, the two free Apprentices, another Apprentice and a Molten Reflection for infinite Fireball.