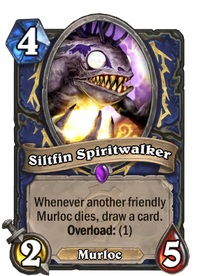 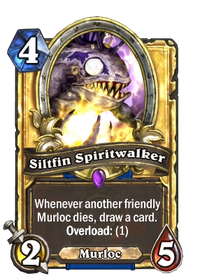 Whenever another friendly Murloc dies, draw a card. Overload: (1)

The elements respond to anyone who calls them for a worthy cause, even if you call them by yelling, "MRGHRGLGLGL!"

Siltfin Spiritwalker is an epic shaman minion card, from the Goblins vs Gnomes set.

Siltfin Spiritwalker can be obtained through Goblins vs Gnomes card packs, or through crafting.

Similar to Cult Master, the best time to play this card is on top of an existing field of Murlocs that you can throw into your opponent's minions. Its high cost and Overload make it difficult to follow up afterward. This could act as an alternative to Old Murk-Eye, allowing you to draw game-finishing damage.

This murloc works well in Quest decks based around Unite the Murlocs. It provides draw needed to complete the quest quicker, and can be further buffed with cards such as Everyfin is Awesome or Gentle Megasaur.

The Siltfin are a tribe of murloc found in Azuremyst Isle, in north-eastern Azeroth. 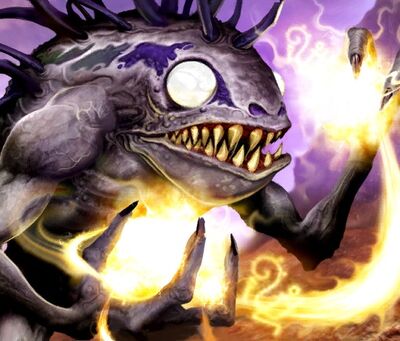