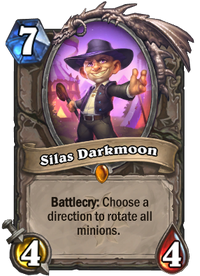 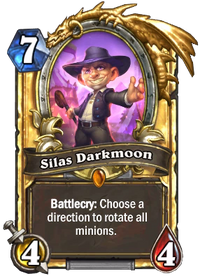 Battlecry: Choose a direction to rotate all minions.

"You might remember me from such attractions as 'Being Shot out of a Cannon' or 'That Carousel Ate My Friend.'"

Silas Darkmoon is a legendary neutral minion card, from the Madness at the Darkmoon Faire set.

Regular Silas Darkmoon automatically given to each player the first time they log into Hearthstone starting from October 22, 2020.

Golden Silas Darkmoon is given to each player, who has purchased the Darkmoon Faire Rewards Track Tavern Pass.

Regular and golden Silas Darkmoon are Uncraftable (cannot be crafted or disenchanted). 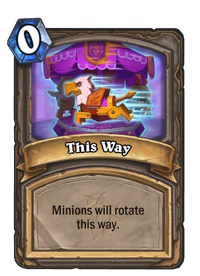 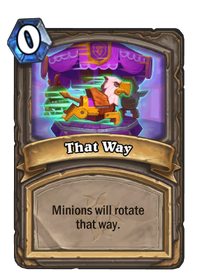 Generally, you want to ensure what you give your opponent is much worse than what you take from them. For example, paladins can trade a Silver Hand Recruit for a larger threat. Be mindful of your outermost minions. Even on an empty board, Silas will trade himself away, although this can still be used to steal high-impact minions like Rattlegore and Obsidian Statue.

Silas can also be used similar to a neutral Treachery, giving your opponent an undesirable minion. Warriors can give an opponent a Soulbound Ashtongue and cast Shield Slam on it for an OTK.

While you might lose some value of Silas from this, stealing an opponent's minion buffed with spells like Libram of Wisdom or just combo pieces like Gadgetzan Auctioneer can prove to be useful, with the former disrupting potential Libram and Yogg-Saron, Master of Fate strategies and the latter hurting decks like Miracle Rogue or decks based on C'Thun, the Shattered.

Silas Darkmoon is the founder and leader of the Darkmoon Faire, an exotic bunch of wandering showmen, who together celebrate the wondrous and mysterious idiosyncrasies found in Azeroth. Previously operating in Mulgore and Elwynn Forest, his Faire has since the time of Deathwing's fall moved to Darkmoon Island.