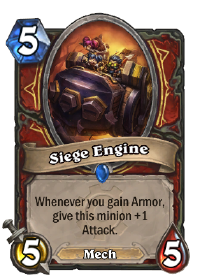 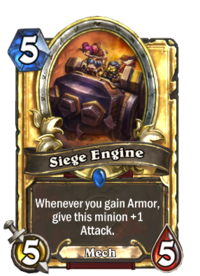 Whenever you gain Armor, give this minion +1 Attack.

Siege Engine is a rare warrior minion card, from the Goblins vs Gnomes set.

Siege Engine can be obtained through Goblins vs Gnomes card packs bought through the ingame Shop, purchased online from the Battle.net shop, or through crafting.

This card plays excellently with the warrior hero power Armor Up!, and the various Armor-related cards in the warrior's arsenal. Cards such as Armorsmith, Whirlwind, Death's Bite, Shield Block, Shieldmaiden, or other cards which all for the rapid Armor gain will allow this minion to rapidly spiral out of control.