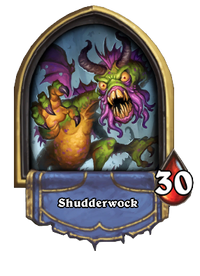 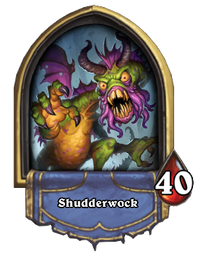 And 'lo in uffish thought he stood, crying "Battle" in the wood.

For the minion card of the same name, see Shudderwock.

Shudderwock is a boss that can be encountered during the Monster Hunt.

Your taunt minions need to be able to hold his minions back until you get the upper hand.

Since his hero power affects you as well, try to use your beast synergy card for this fight.

Use your random effects and use your hero power to get the results you want.

Keep his minions at bay, for they will hurt you through a combination of spells, hero power and minions. Take advantage of his hero power.

Hagatha the Witch
The Shudderwock! A terrible thing to unleash... A joy to watch.

Shudderwock
It speaks! It bleats! So weak it seeks relief from beasts that feast.

Shudderwock
Pay the price, not once, but twice.
Trouble, doubbled!
We meet, we greet. A treat? Repeat.

Shudderwock
My run... is done!

Shudderwock
With each hero devoured, these woods are empowered.

Shudderwock is original to Hearthstone. Its name is based on the Jabberwocky, the monster from a poem of the same name by Lewis Carroll.