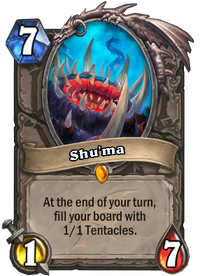 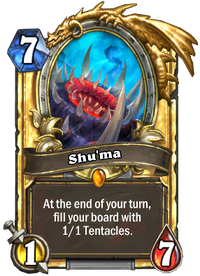 At the end of your turn, fill your board with 1/1 Tentacles.

How to tell your mother to go away.

Shu'ma is a legendary neutral minion card, from the Descent of Dragons set.

Shu'ma can be obtained through Descent of Dragons card packs, through crafting, or as an Arena reward. 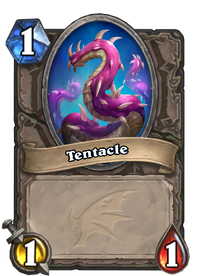 Shu'ma is a powerful minion to include in a deck running Unseal the Vault, as it summons up to six minions at the end of each of your turns. It can even be put to good use in other token-based decks; if the Tentacles are still alive at the start of your next turn, they can even be paired with cards like Savage Roar and Bloodlust.

If you are planning to make use of the Tentacles that Shu'ma produces, one thing to be aware of is that the Tentacles are highly vulnerable to small board clears, although it's difficult to remove both Shu'ma and the Tentacles if the board isn't contested. Shu'ma also bears a weird attack stat of 1, which makes it susceptible to cards like Cabal Shadow Priest and Mossy Horror, though also makes it synergize with cards such as Meat Wagon, Deck of Chaos and Master Oakheart.

Summon
I am the beginning of the end.
Attack
Into the maw!

Shu'ma is a Forgotten One that can be found in Dragonblight during the Dragon Soul raid.

Shu'ma is a servant of the Old Gods. Within the Maw of Shu'ma, the faceless one Yor'sahj binds the blood of Shu'ma to his will, granting him power. Shu'ma ceases to attack upon the death of Yor'sahj.