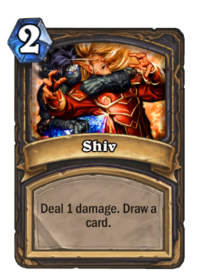 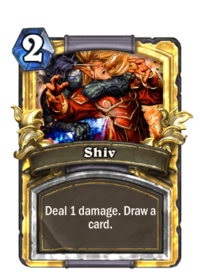 Rogues are experts at SHIV-al-ry.

Shiv is a rogue spell card, from the Basic set.

Two copies of Shiv are a reward for raising a rogue to level 6.

Two Golden copies of Shiv are a reward for raising a rogue to levels 45 and 46.

Shiv is uncraftable and cannot be crafted or disenchanted.

Shiv is an excellent tool for building card advantage by allowing you to draw a card when you play it, while also allowing you to remove a minion with 1 remaining Health. Due to its low mana cost, it can also be used to activate another card's Combo effect.