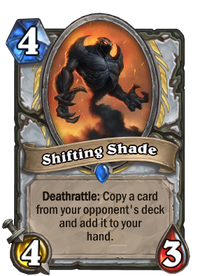 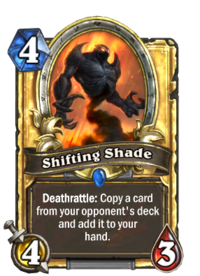 Deathrattle: Copy a card from your opponent's deck and add it to your hand.

Yeah, it's cooler in the shade, but you're also more likely to get JACKED.

Shifting Shade is a rare priest minion card, from the Whispers of the Old Gods set.

Shifting Shade can be obtained through Whispers of the Old Gods card packs, or through crafting.

A good 4-mana card in any Priest deck. Compared to Chillwind Yeti, it trades 2 health for a copy of a card from your opponent's deck. This proves most useful in Arena, where the lack of card draw is a common problem.

It fits very well in a Priest deck that runs N'Zoth, the Corruptor.

Summon
My echoes are eternal.