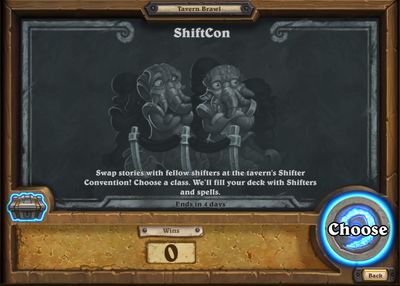 "Swap stories with fellow shifters at the tavern's Shifter Convention! Choose a class. We'll fill your deck with Shifters and spells."

Additionally, ShiftCon was one of nine Tavern Brawls featured as part of the 100th Brawl, A Cavalcade of Brawls!. Its mechanics were used by the warlock class.

This Tavern Brawl sees players doing battle with randomized decks. Each deck contains numerous copies of Shifter Zerus, as well as some random spells for the chosen class. Each player also begins their first turn with three Mana Crystals, effectively starting the game on turn three. 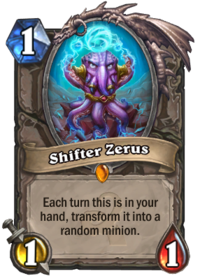 Playing Lady in White with Shifter Zerus in your deck will cause any minion Zerus transforms into to have 1 attack.