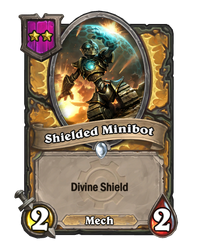 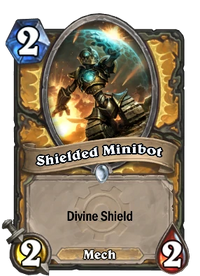 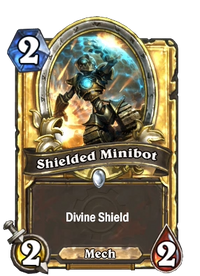 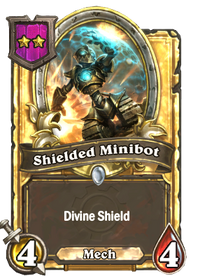 Shielded Minibot was a Tier 2 minion in the Battlegrounds game mode.

Shielded Minibot was a decent body to have on the field in early rounds. Being a mech that not only had a natural divine shield, but lacked Taunt, it was easily the best choice to magnetize Replicating Menace onto partly since the divine shield would give double value to the attack increase.

Since it didn't have taunt, it would die after your taunts to release the Microbots when there is more space for them, giving Junkbot more buffs over the course of a combat than it would otherwise if you magnetized Replicating Menace to a taunt like Annoy-O-Tron who may be the first one to die, or a mech that naturally had deathrattle like Harvest Golem whose Damaged Golem may crowd out some of your Microbots. Similarly it staggered the shields that your Cobalt Guardian would obtain, reducing the chances that these mechs would be summoned while Cobalt Guardian still had the previous shield.