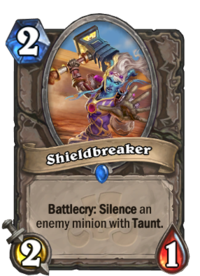 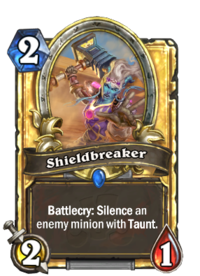 Can also break up fights, relationships, and unions.

Shieldbreaker is a rare neutral minion card, from the Rastakhan's Rumble set.

Shieldbreaker can be obtained through Rastakhan's Rumble card packs, or through crafting.

Comparable to a more restrictive, but cheaper, Ironbeak Owl. Shieldbreaker can nullify a Taunt minion and allow other minions to trade more efficiently or achieve lethal. Note that, beyond removing Taunt, Shieldbreaker also removes any other buffs and effects placed on the minion, such as a minion with Spikeridged Steed or the Deathrattle effect of Voidlord.

When playing around Shieldbreaker, it is advised to play multiple smaller Taunt minions instead of one large one.