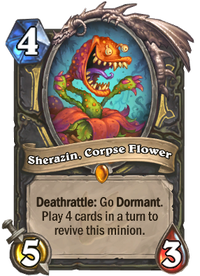 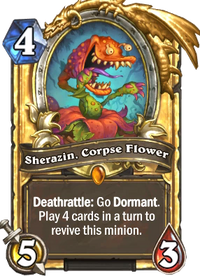 Deathrattle: Go Dormant. Play 4 cards in a turn to revive this minion.

Sherazin, Corpse Flower is a legendary rogue minion card, from the Journey to Un'Goro set.

Sherazin, Corpse Flower can be obtained through Journey to Un'Goro card packs, or through crafting. 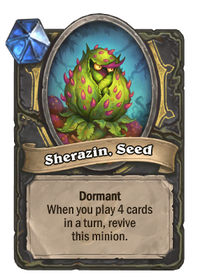 Sherazin, Seed with 3 out of 4 cards played

Example: You cast Vanish as your fourth card. All minions are returned to the hand, not including Sherazin, Seed, which is a permanent. Then Sherazin revives, becoming a minion on the board.[4]

This minion's Deathrattle is comparable to that of Dreadsteed, in that the minion is revivable, and it will remain on the board when it dies, taking up a minion slot. However, the revival of the minion is only carried out when the condition on the card text is met, which may take many turns to achieve.

Sherazin excels in rogue decks that feature Gadgetzan Auctioneer, as the deck archetype can rapidly cycle cards in a single turn, consistently reviving Sherazin. Alternatively, card generation from cards such as Swashburglar and Shaku, the Collector open up more combo options (though the mana cost of the new cards make this somewhat unreliable). In particular, Razorpetal Volley offers 3 cards to play at the low cost of 4 mana.

A deck built around Sherazin can be effective, utilizing cards that can create copies of Sherazin (i.e. Shadowcaster, N'Zoth, the Corruptor) combined with lots of card generation.

Sherazin is original to Hearthstone. It is a form of plant that doesn't truly die upon being "killed", instead curling up and turning itself into a seed until it is ready to re-emerge.[8]

Sherazin was promoted through an appearance in World of Warcraft before its Hearthstone release. Sherazin appears as an elite mob during the Un'Goro Madness micro-holiday in World of Warcraft, where it is depicted as a giant lasher. The boss's abilities include a dormant phase, during which it regenerates, immune to players' attacks, but sending out regular pulses of unavoidable damage; players can avoid this by standing next to large crystal spines spawned during the phase.

It's unclear whether Sherazin is male or female, or if its sex is even relevant as a plant. Designers have used both sexes to refer to Sherazin in interviews.[9]

Sherazin, Corpse Flower changed quite a bit during development. At one point it had a lower cost, and at another time more stats with only three cards required for its triggered effect. Ultimately the card requirement was increased to four to make it "a little bit build-around", encouraging players to consider synergistic cards for their decks. It also wasn't initially known how Sherazin would work from a UI perspective. One idea was to have the seed sit near the player's Hero Power, but eventually the UI team came up with the solution of treating it as a permanent on the board.[9]