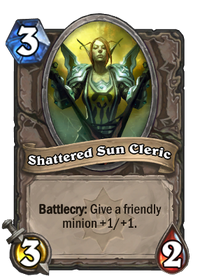 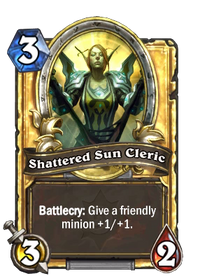 Battlecry: Give a friendly minion +1/+1.

They always have a spare flask of Sunwell Energy Drink™!

Shattered Sun Cleric is a neutral minion card, from the Basic set.

Two copies of Shattered Sun Cleric are automatically included in all players' collections upon unlocking the priest class.

Two Golden copies of Shattered Sun Cleric are a reward for raising a priest to levels 53 and 54.

Shattered Sun Cleric is uncraftable and cannot be crafted or disenchanted.

Summon
We must cleanse the Sunwell.

The Shattered Sun Offensive is an army of blood elf and draenei priests, paladins, magi and warriors rallied by the naaru to combat Kael'thas Sunstrider's mad bid to use the Sunwell as a portal to summon his master, Kil'jaeden. Their operations are centered around the Isle of Quel'Danas, where the Sunwell is located. The Offensive is the culmination of a plea for unity between the draenei priests of the Aldor and the blood elf wizards of the Scryers in an effort to prevent Kil'jaeden's summoning, which would result in the end of all life on Azeroth.