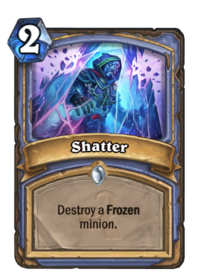 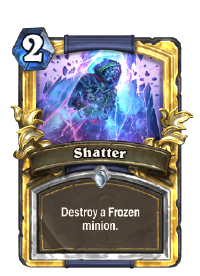 What's cooler than being cool?

Shatter is a common mage spell card, from the Whispers of the Old Gods set.

Shatter can be obtained through Whispers of the Old Gods card packs, or through crafting.

This card has obvious synergy with decks involving Freeze effects, such as Freeze Mage. It is most efficiently combined with AoE Freeze effects like Blizzard, allowing the mage to remove a single minion that survived the former spell's weaker damage. At best it can be used with Freezing Potion for a 2-mana hard removal.

Unfortunately, its inability to function without synergy makes this card ineffective in most cases.

Snap Freeze is a strictly superior version of this card.

In World of Warcraft, Shatter is a passive Frost mage ability, gained at level 16. It multiplies the critical strike chance of all of the mage's spells against frozen targets by 1.5 and adds another 50% chance.

Shatter is a critical component in the Frost mage arsenal, adding synergy and burst damage with their many freezing spells, such as Frost Bolt, Frost Nova and Ice Lance.