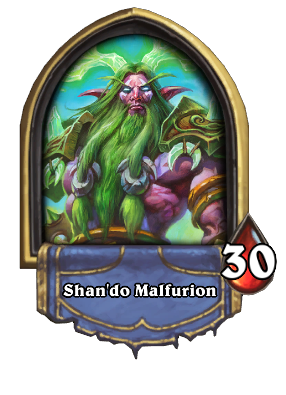 Shan'do Malfurion is an alternate hero for the

Druid class. It is obtained by winning 1,000 Ranked or Arena games as druid.

Shan'do is a title of respect in the language of the night elves (Darnassian) meaning "honored teacher".

It is the title by which Archdruid Malfurion Stormrage is addressed, both by druids and by others, such as Warden Maiev Shadowsong. It was also the title by which Malfurion addressed the demi-god Cenarius, and occasionally used by Illidan whilst under Rhonin's tutelage during the War of the Ancients.

When viewed in the collection, Shan'do Malfurion has the following flavor text:

A good seed that blossomed into one of the most powerful archdruids of all time. Obtained from winning 1,000 Ranked or Arena games as druid.

All 1,000 Win heroes use the same emotes as the basic hero. For a list, see Malfurion Stormrage#Emotes.