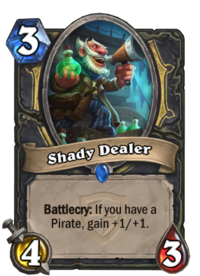 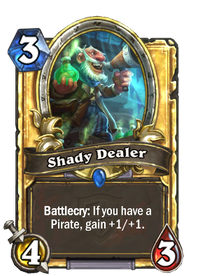 I have great deal for you... for 4 damage to your face!

Shady Dealer is a rare rogue minion card, from the Grand Tournament set.

Shady Dealer can be obtained through The Grand Tournament card packs, or through crafting.

Not being a Pirate, Shady Dealer is best used alongside non-synergistic Pirates such as Dread Corsair and Bloodsail Raider.

With a Pirate on the field, Shady Dealer has more Attack and Health than is normally found on a 3 mana drop. However, with no effects like Charge, Stealth or a Deathrattle akin to Haunted Creeper he is much stronger when your opponent has an empty board.

Shady Dealer is powerful in Odd Rogue Decks as many of the pirates Swashburglar, Patches the Pirate, Buccaneer, Southsea Deckhand and Bloodsail Flybooter and its battlecries are 1 cost pirates that can activate its battlecry very easily due to their low cost that make it a 3 mana 5/4

Summon
Pst. Want a deal?
Attack
It's a deal.

"Shady Dealer" is a title used for some vendors in World of Warcraft selling illicit products, sometimes including general goods and reagents but especially rogue poisons. While poisons were sold from a variety of poison vendors, this term was used for those who operated through grey or black market channels. Poison ingredients were removed from World of Warcraft with the Mists of Pandaria expansion, but some shady dealers still sell other goods.

This shady dealer is shown on the grounds of the Grand Tournament, but there are no such vendors at the Argent Tournament in World of Warcraft. Based on the association with pirates, the shady dealer depicted on this card may be based on Sly Garrett, the dealer in Booty Bay, who likely has many pirate customers. On the other hand, as a male gnome he bears the most resemblance to Tynnus Venomsprout, albeit much older. It is possible this character is an older version of Tynnus or another gnome who relocated to the Tournament, or he may simply be an original Hearthstone character.