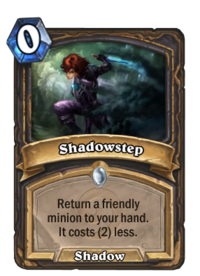 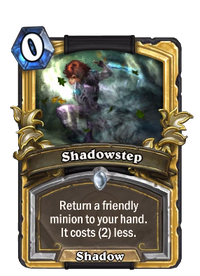 Return a friendly minion to your hand. It costs (2) less.

Rogue dance troops will sometimes Shadowstep away at the end of a performance. Crowds love it.

Shadowstep is a common rogue spell card, from the Classic set.

Shadowstep can be obtained through Classic card packs, through crafting, or as an Arena reward.

Two copies of regular Shadowstep (Core) are obtained for raising rogue to level ?.

Two copies of golden Shadowstep (Core) are obtained for winning 50 games as rogue.

Shadowstep (Core) is uncraftable and cannot be crafted or disenchanted.

Shadowstep is commonly employed to save minions when you lack a Taunt. It also allows players to return a minion to their hand and then replay them - a useful tactic as it allows them to activate their Battlecry a second time.

Another deadly use of Shadowstep is combining it with minions with Charge. Minions with Charge can attack several times in the same turn when you take them back in your hand and play them again.

Note that the "it costs (2) less" effect does not stack, and is consumed upon playing the affected minion. When you Shadowstep a 4 mana cost minion and play it again for 2 mana, if you Shadowstep it once again, the next time you play it, it will again be 2 mana, not 0. The reason for this is that once the card is played and transformed into the minion, it no longer has any connection to the enchanted card that you played it with.

Part of the reason for Shadowstep's design was to give rogues a way to activate Battlecries/Combo effects multiple times.[2] However, in practice players tended toward using Shadowstep primarily to enable re-use of Charge minions such as Leeroy Jenkins (see below).[2] The Blackrock Mountain card Gang Up was later created in order to provide an alternate means of activating these effects.[2]

Prior to the nerf of Leeroy Jenkins in September 2014, 2 x Shadowstep was often used in combination with Leeroy in Miracle Rogue decks in order to deal 18 damage in a single turn. Combined with 2 x Cold Blood, this total could be increased to 26 damage in a single turn, not counting other minions and weapons. Unsurprisingly, this led to an excessive level of non-interactive play, with opponents largely unable to defend against this amount of burst. The nerf increased Leeroy's mana cost to 5, preventing him from being combined with more than one Shadowstep in a turn (unless The Coin is used) and moderating the combo's power.

Shadowstep is a rogue ability from World of Warcraft. It allows rogues to step through the shadows and appear behind a target. Movement speed is also increased by 70% for 2 seconds afterwards. 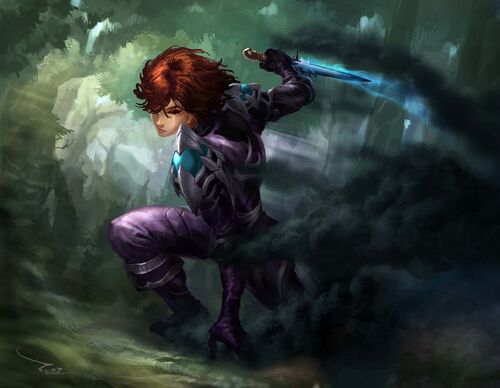