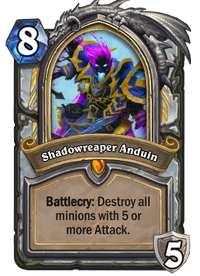 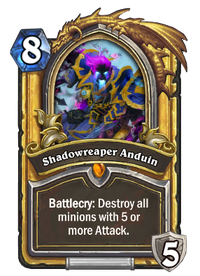 Battlecry: Destroy all minions with 5 or more Attack.

"I will tell you what Velen never taught me. Whosoever stands before the Light… inevitably casts a shadow."

Shadowreaper Anduin is a legendary priest hero card, from the Knights of the Frozen Throne set.

Shadowreaper Anduin can be obtained through Knights of the Frozen Throne card packs, or through crafting.

Like all other death knight hero cards, Shadowreaper Anduin is 1 of the 9 possible hero card rewards for completing the prologue of the Icecrown singleplayer adventure. 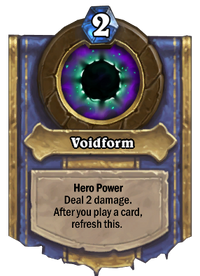 Shadowreaper Anduin has a powerful Battlecry, capable of clearing the field of multiple powerful minions. If you expect your opponent is going to summon big minions, it's often best to delay playing the card until the time is right. Once played, Shadowreaper Anduin provides you with a decent helping of armor, which can help you rebound if you're at low health.

The real strength of Shadowreaper Anduin, though, comes with his Hero Power, Voidform. As it refreshes each time a card is played, it's best to keep some low cost cards in hand so that you can use the Hero Power multiple times in one turn. [1] This serves the dual purpose of letting him easily control the board by blasting down enemy minions and giving him a significant boost in burst damage to close out games.

A notable combo to use with Shadowreaper Anduin is Raza the Chained, who gives you more opportunities to use your Hero Power in a single turn by lowering its cost.

Prophet Velen is very powerful when combined with Shadowreaper Anduin, who doubles your damage output from both your Hero Power and your spells, adding a significant amount of burst damage. If left alive the next turn, it can spell death for your opponent, especially if Raza is involved.

Another card that works well with Shadowreaper Anduin is Lyra the Sunshard. As she generates spells each time a spell is activated, you can get into a solid loop of activating and generating cheap spells to continuously use Voidform. This is assisted by the presence of Radiant Elemental, who can reduce the cost of spells to ensure more are activated.

Shadowreaper Anduin forms a two-turn kill (barring healing and armor) alongside Alexstrasza and two copies of Mind Blast; by setting the opponent to 15 health with Alexstrasza's Battlecry, he threatens lethal on the next turn with 3 Voidforms and 2 Mind Blasts for 16 damage.

Another really powerful combo is with Spawn of Shadows; it can easily allow for you to burst down your opponent using discounted Voidforms thanks to Raza the Chained and cheap cards, it makes OTKs very achievable- however, you should make sure you have enough health to take the damage from Spawn of Shadows, lest you end up killing yourself.

Summon
The Light has betrayed me!

Shadowreaper Anduin is the death knight version of Anduin Wrynn. 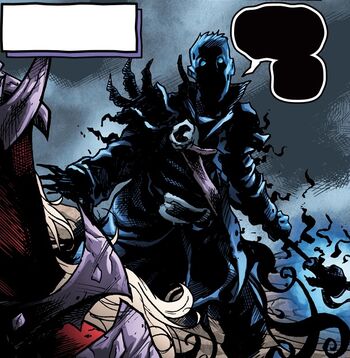 In the web comic Freedom, a Pompous Thespian tells a tale of how Valeera Sanguinar searched for her friends, King Varian Wrynn and his son Anduin, who had disappeared in the countryside after the Scourge had once more risen up to sully the land. Valeera soon encountered Garrosh Hellscream, who had become a death knight in service to the Lich King. Garrosh claimed that he knew who had taken the two Wrynns and gave the rogue a pair of enchanted blades. Valeera asked about the one who had taken the two men, and Garrosh explained that the process of becoming a knight of the Frozen Throne could be "unpleasant", and that some handled it better than others. The Lich King had recently raised an extremely unwilling soul, who had been "broken" by the process and was so deranged he could not be controlled. He escaped into the wilds and began using his abilities to raise his own army of the dead, threatening not only the Frozen Throne, but the world at large. Garrosh concluded by stating that the fates of the rogue's human friends hung in the balance, and that only Garrosh and Valeera stood between the shadow and his goal of absolute chaos. Suddenly, Garrosh and Valeera found themselves facing the Shadowreaper and its army of undead. Valeera leapt into the fray with the blades Garrosh had given her, but each attack turned her more and more into a death knight. Garrosh and Valeera fought their way to the insane shadow at the undead army's heart, but in response, the creature sent forth its ascendant to transform one of the undead soldiers into a hulking monstrosity. Valeera fully embraced her darkness and gleefully slew the ascendant. However, as she prepared to attack the shadow, it told her "I know you will not harm me. You love me." The Pompous Thespian's tale is interrupted by the audience, who point out the anachronistic nature of the story and that Anduin couldn't have been more than ten or twelve years old when this supposedly happened. The thespian counters that he never said that the villain was Anduin, but the listeners are not convinced, saying that it couldn't be anyone but Anduin. When the audience again complains about the timeline, the thespian dismisses them by describing the story as "dramatic license" and continues his tale with Valeera turning on Garrosh as she realized that he had tried to make her kill the only person left in the world she cared about. While Valeera and Garrosh were arguing, Anduin began casting a spell, shouting that they were doomed and that only he could save them. Ultimately, Valeera turned to Anduin and stabbed him in the chest. As she stood over him, she raised her dagger, conflicted by emotions. Ultimately, the Pompous Thespian refuses to reveal the ending of the tale and that the point of the story was to think about Valeera' choice, and if "freedom" is all it's cracked up to be if one takes it to its logical conclusion.