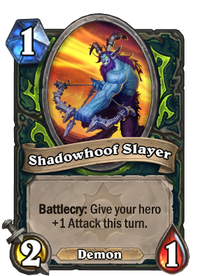 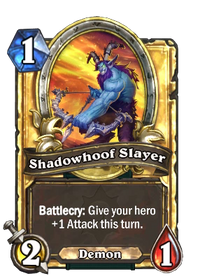 Battlecry: Give your hero +1 Attack this turn.

Was a humble Elven Archer before Sargeras got to him.

Shadowhoof Slayer is a demon hunter minion card, from the Basic set.

Two copies of Shadowhoof Slayer are automatically included in all players' collections upon unlocking the Demon Hunter class.

Two Golden copies of Shadowhoof Slayer are a reward for raising a Demon Hunter to levels 30 and 32.

Shadowhoof Slayer is uncraftable and cannot be crafted or disenchanted.

Shadowhoof Slayer is a decent tempo play, especially if going second. It gives the Demon Hunter effectively a free use of their hero power, letting them potentially kill off an opponent's turn 1 play while establishing a 2/1 minion. On turn 2, Shadowhoof Slayer can be played alongside the hero power Demon Claws, killing off a number of 3/2 minions.

If you're going first, this minion is a good aggressive start that can deal 1 damage to the opponent's face and threaten 2 more. This is weak in a Demon Hunter mirror however, since they can easily kill the minion with their hero power or a Shadowhoof Slayer of their own.

Later in the game, you can use this minion's Battlecry to supplement an equipped weapon, boosting it by 2 damage if used with the hero power as well.

Shadowhoof is a sect of satyrs serving Illidan Stormrage in the Shadowmoon Valley.