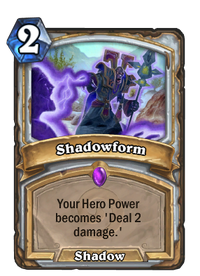 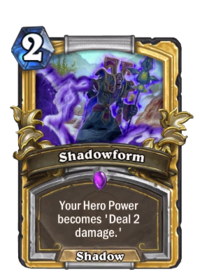 If a bright light shines on a priest in Shadowform… do they cast a shadow?

Shadowform is an epic priest spell card from the Hall of Fame set, formerly from the Classic set.

Shadowform can be obtained through crafting only.

Two copies of regular Shadowform (Core) are obtained for raising priest to level ?.

Two copies of golden Shadowform (Core) are obtained for winning 250 games as priest.

Shadowform (Core) is uncraftable and cannot be crafted or disenchanted. 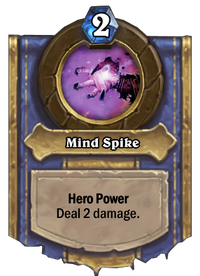 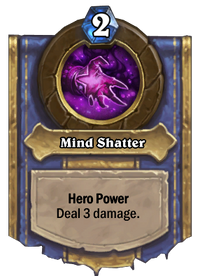 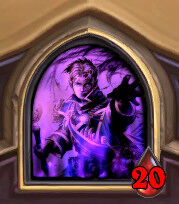 Example: If a mage has replaced their hero with Ragnaros the Firelord and plays a Shadowform obtained from Nefarian, their Hero Power will still be replaced by Mind Spike.

Example: You can use Lesser Heal, cast Shadowform and use Mind Spike on the same turn.

This is more powerful than it might appear at first glance. 2 "untauntable" damage that can be targeted at anything is better than any other offensive Hero Power. It is comparable to a twice as powerful Fireblast, or three times as powerful when changed to Mind Shatter. Just remember you are trading a reliable source of healing synergies.

Shadowform tends to be weaker in the early game, but more powerful as mana becomes more available later in the game. Shadowform costs 3 mana, and Mind Spike costs an additional 2 mana for a total of 5 mana for 2 damage. This can be a big hit to a deck's tempo. However, once mana is more free, the double Shadowform Mind Shatter is the most powerful Hero Power in the game (other than INFERNO! granted by the warlock's Lord Jaraxxus card; and DIE, INSECT! granted by the neutral Majordomo Executus card.).

If you play Prophet Velen, your Shadowform ability will deal double damage. This means Mind Spike will deal 4 damage and Mind Shatter will deal 6 damage, the latter being arguably more powerful and useful than any other Hero Power (INFERNO! included). This is because unlike INFERNO!, you do not have to wait a turn to deal the 6 damage, and you can deal the damage behind enemy Taunt minions. Under these circumstances, however rare or difficult they may be to pull off, you essentially gain a Fireball which costs only 2 mana and can be played every turn. Just make sure to protect your Prophet Velen.

Let me ask you this, brothers and sisters: Can good exist without evil? Can there be light without dark?[3]

This spell is normally used by Shadow priests. Though Anduin Wrynn studied under King Magni and High Priest Rohan, which suggest Wrynn was a priest of light, others of the world of Azeroth and Outland believe light does not exist alone, that there must be a balance between the light and dark. This other side to Anduin's powers is reflected in his portrait, with dark shadow energy covering his left hand and swirling outwards, perhaps illustrating his command of this other side of the priest's powers.

I draw deep from the shadows to slake my thirst for power. I'm never thirsty for long.[4]

Shadowform is a priest ability available only to Shadow priests. Using it shifts the priest into a Shadowform, increasing their spell haste, armor and Shadow damage dealt. However, these dark powers have their price; attuning to the Shadow leaves the priest unable to call upon the power of the Light, preventing them from using most Holy spells. Shadowpriests are almost always to be found in Shadowform, but can drop the form if need be, in order to make use of their healing spells. Priests in Shadowform are instantly recognisable by their purple, translucent appearance, with this visual effect extending to mounts and equipment. 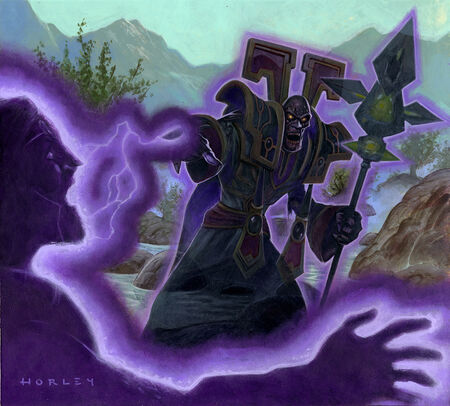