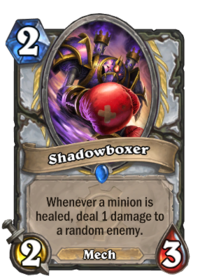 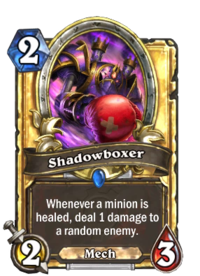 Whenever a minion is healed, deal 1 damage to a random enemy.

Shadowboxer is a rare priest minion card, from the Goblins vs Gnomes set.

Shadowboxer can be obtained through Goblins vs Gnomes card packs purchased online from the Battle.net shop, or through crafting.

This minion is similar to Knife Juggler, but with a synergy based around healing instead of minion summoning. Paired with a few AoE healing effects, this minion can easily deal a dozen damage to random enemies, in addition to its value as a body on the board. Drop it right before using Circle of Healing or Holy Nova for lots of damage.

Because of its potential for ongoing and uncontrollable damage, this minion can serve as a soft taunt in a similar fashion to Knife Juggler. Even if it only deals a few points of bonus damage, it may serve the purpose of drawing enemy removal spells or attacks, deflecting attention from other minions. Given its low cost, this minion need only deal a few points of damage to be well worth the mana.

This minion is excellent for finishing damaged minions, for thinning boards of multiple smaller minions, or popping Divine Shields. 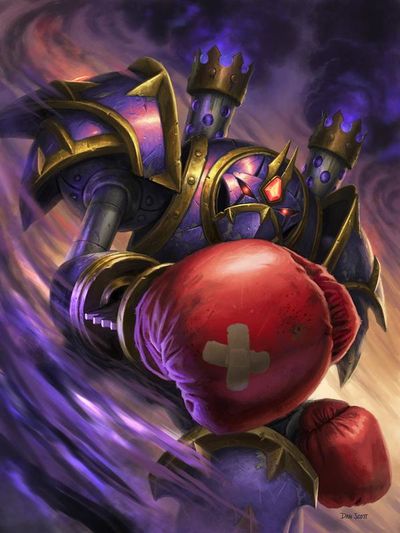