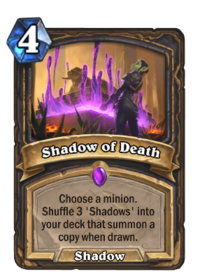 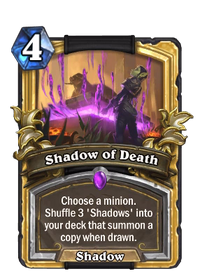 Choose a minion. Shuffle 3 'Shadows' into your deck that summon a copy when drawn.

Shadow of Death is an epic rogue spell card, from the Saviors of Uldum set. 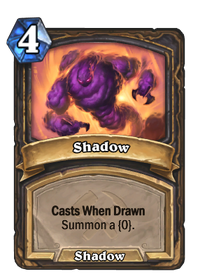 The higher the value of the copied minion, the stronger the card will be. Since the Shadow card summons the minion when drawn, avoid low-statted Battlecry minions and pick cards that can have an immediate effect like a minion with Rush. Remember that you can copy enemy minions with this card.

You can combine this card with Augmented Elekk to shuffle in 6 cards for 7 Mana, making it slightly more efficient than x2 Shadow of Death. Combine it with an empty deck and Preparation and you can summon 6 copies of a minion that costs 5 or less mana on the next turn (You can use Preparation + Shiv to draw them on the same turn). You can use this combo to create OTK scenarios with cards such as Leeroy Jenkins and Desert Obelisk.