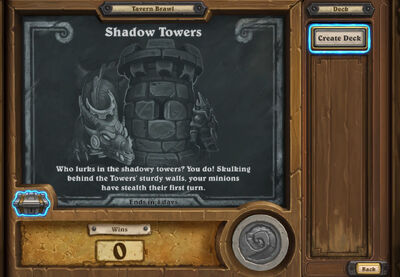 "Who lurks in the shadow towers? You do! Skulking behind the Towers' sturdy walls, your minions have stealth their first turn."

This Tavern Brawl sees players doing battle with custom decks of any class. Whenever a minion is played, it gains Stealth, lasting until the start of the player's next turn. Each hero starts with 10 Armor, in addition to the usual 30 Health.