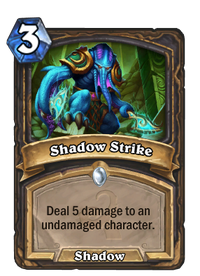 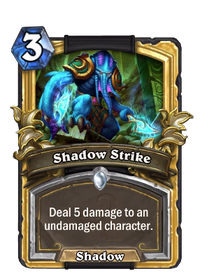 Deal 5 damage to an undamaged character.

It's like a backstab, only from the front. And with two more stabs.

Shadow Strike is a common rogue spell card, from the Whispers of the Old Gods set.

Shadow Strike can be obtained through Whispers of the Old Gods card packs, or through crafting.

As referenced in its flavor text, this spell is essentially a larger Backstab, but with the advantage of also being able to target the enemy hero - provided they are at full Health.