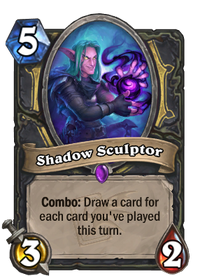 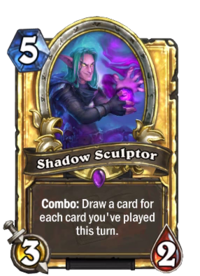 Combo: Draw a card for each card you've played this turn.

Carving out new territory in the realm of shadow puppetry.

Shadow Sculptor is an epic rogue minion card, from the Galakrond's Awakening set.

Shadow Sculptor is a potent source of draw in Rogue decks which contain many low-cost cards, such as "miracle" decks.

The card's effect does not count itself - for example, if a player plays The Coin on turn 4 followed by Shadow Sculptor, it will draw only one card. See the Advanced rulebook for more information.