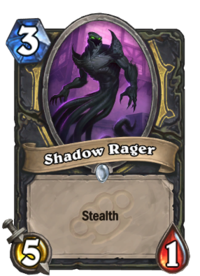 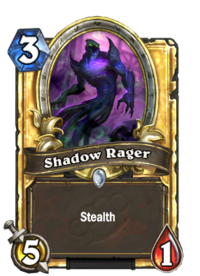 Shadow Rager is a common rogue minion card, from the Mean Streets of Gadgetzan set.

Shadow Rager can be obtained through Mean Streets of Gadgetzan card packs bought through the ingame Shop, purchased online from the Battle.net shop, or through crafting.

Worryingly similar to Magma Rager, this minion's Stealth significantly improves its value over that card, and offers synergy with cards like Shadow Sensei.

While this creature shares the conventional naming and stat distribution of elemental "ragers" (Magma Rager, Ice Rager and Am'gam Rager), it bears more resemblance to a shade, much like the Ancient and Shifting Shades.