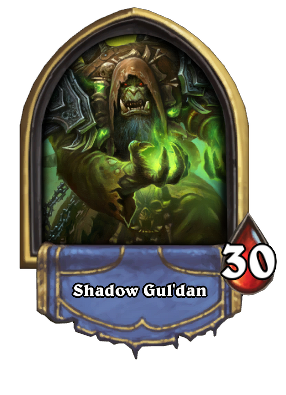 Shadow Gul'dan is an alternate hero for the

Warlock class. It is obtained by winning 1,000 Ranked or Arena games as warlock.

This portrait depicts a younger Gul'dan from an alternate timeline, as seen in Warlords of Draenor.

Gul'dan was an orc who was cast out of his clan for his physical weakness, and agreed to a secret alliance with the Burning Legion in exchange to wield fel magic. The first warlock, he seeks to spread his influence — and the power of the Legion — to all worlds. While the rest of the orcs did not drink the blood of Mannoroth, Gul'dan and his followers, the Shadow Council have. Indebted to a demonic lord, Gul'dan is one of a handful of fel-corrupted orcs on Draenor, his visage twisted balefully by demonic communion. He led the Shadow Council in his bid to deliver Draenor into the hands of the Burning Legion.

Gul'dan returned as the primary antagonist in the first half of World of Warcraft: Legion, where he made an alliance with the nightborne under Grand Magistrix Elisande to serve the Legion. Atop the Nighthold, he intended to use the corpse of Illidan Stormrage as a vessel to bring Sargeras onto Azeroth. However, the nightfallen rebellion and the order leaders who had fought on Draenor were able to stop him, and Khadgar returned Illidan's soul to his body. His plan in tatters, Gul'dan was destroyed by the reborn Illidan.

When viewed in the collection, Shadow Gul'dan has the following flavor text:

If you thought Gul'dan was a happier, gentler soul on his homeworld, I have bad news for you. Obtained from winning 1,000 Ranked or Arena games as a warlock.

All 1,000 Win heroes use the same emotes as the basic hero. For a list, see Gul'dan#Emotes.