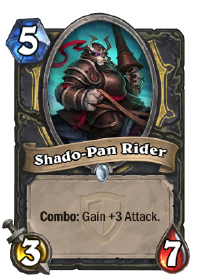 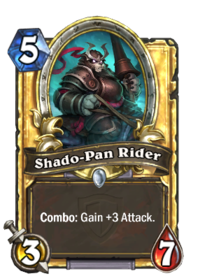 He needed a break after that business in the Vale of Eternal Blossoms. Naturally, he chose to spend his vacation in an icy snowscape killing monsters.

Shado-Pan Rider is a common rogue minion card, from the Grand Tournament set.

Shado-Pan Rider can be obtained through The Grand Tournament card packs bought through the ingame Shop, purchased online from the Battle.net shop, or through crafting.

If the Combo is activated, Shado-Pan Rider will be given an enchantment of +3 Attack, which can be Silenced.

Starting with The Coin (or attacking with Cutpurse on turn 3) allows you to drop this as a 6/7 on turn 4.

Summon
We are the sword in the shadows.
Attack
Shadow strike!

The Shado-Pan, also known as the "Sword in the Shadows" and the "Watchers on the Wall", are a secretive organization of pandaren with a ninja-like culture dedicated to protecting Pandaria. The Shado-Pan are in a timeless struggle with the sha and the mantid. As Pandaria has no standing army, it falls to them to defend the land, so other pandaren can go about their peaceful lives. Hopeful recruits who wish to join the Shado-Pan must undergo a trial named the Trial of the Red Blossoms every seven seasons, when the trees of the monastery turn red. The trial consists of three challenges, which are simple, but also deadly. The Shado-Pan are allied with the Golden Lotus and the August Celestials. The Shado-Pan are the most elite warriors of pandaren society and they understand the threat of the sha.