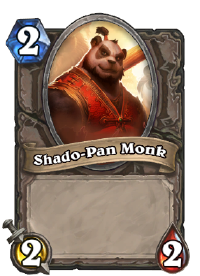 Shado-Pan Monk is a boss card used by Lorewalker Cho boss during the game's tutorial. 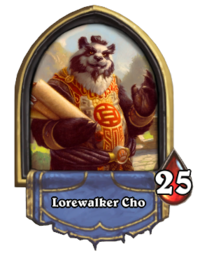 The unarmed monk fighting style originated as a way for pandaren slaves to overthrow their mogu masters by countering strength with agility and speed.

The Shado-Pan order was founded by Emperor Shaohao 10,000 years ago under a charter, just before the Sundering occured. He knew that the dark energy of the sha - the physical embodiment of negative emotions like anger, fear, hatred or doubt - represented a great threat to the pandaren if allowed to fester beneath the land. He tasked the greatest warriors of Pandaria with the sacred duty to restrain and control the sha, and to defeat it wherever it darkens the hearts of their people. And so it was that mere hours after Emperor Shaohao bested his own anger, hatred, and violence, the first of the Shado-Pan took their knee and spoke an oath to the Last Emperor. The same words have been spoken to the Lord of the Shado-Pan by every Shado-Pan initiate who has passed the Trial of the Red Blossoms ever since.