The top of the tower! And an irritated ghost...

Shade of Aran is a boss found in the One Night in Karazhan adventure. It is the first boss of the fourth and final wing, The Spire. 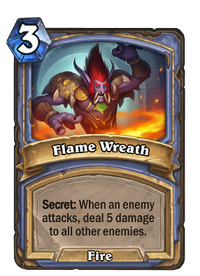 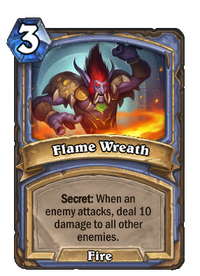 This is a straightforward damage race, built upon the huge Spell Damage bonus from the Shade's Ley Lines (Heroic). Build a deck with as many damaging spells as possible (mage is ideal), and waste no time in going face. Minions are usually best ignored, but Frost Nova is a good filler that can come in handy when there aren't any damage spells to hand. Ice Block can be useful for buying an extra turn. There is little need to include minions in the deck, since the Spell Damage bonus makes even poor damage spells like Arcane Missiles spectacular. Arcane Intellect is a fine filler in case of bad early draws, but should be unnecessary. 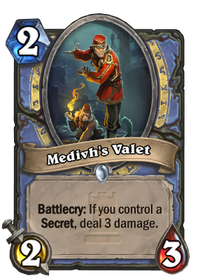 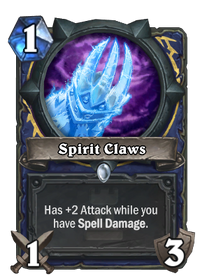 Shade of Aran
Hrmmph. Party guests in the master's chambers? Keep out!

Shade of Aran
Out! Out!

Shade of Aran
No loud music in my tower!
Moroes
*Sigh* Meet Aran, the curmudgeonly ghost.

Shade of Aran
I am not some simple jester! I am Nielas Aran!

Moroes
The dragons have devoured the buffet and now they're eyeing the murlocs!

The master is mighty, but I have powers of my own!

Back to the cold dark with you!

NO! NO! That awful racket! Those horrible 'hellos'!

Hmph. Back in my day, Crackle always dealt six damage.

Moroes
The portal's in the next room! We're just in time!

"Don’t let that door slam! I feel just like a young man of fifty again, sneaking about like this. Mind you, we should be able to stroll about the library and peruse the tomes at our leisure, but the ghost of Medivh’s father has taken up residence. Nielas isn’t so bad when Medivh is around to keep him sensible, but when the Master is out? Pff. Let us simply say that death has not improved his disposition. In fact, he turns into one the ghastliest geists I’ve ever had the displeasure to meet. When the singers were warming up earlier, he kept banging his staff on the floor of the library and yelling at us to “keep down that racket.” He once told me to get off of his lawn. Me, Moroes! And Karazhan doesn’t even have a lawn!" - Moroes[1]

Shade of Aran is a boss in the abandoned tower of Karazhan. He is the spirit of Nielas Aran, the father of Medivh — the previous occupant of Karazhan. He is located in the Guardian's Library, which is a small, circular room (about 45 yards in diameter) with one door that closes and locks as soon as the fight begins.

Shade of Aran is an optional boss. However, after he is defeated, a teleport to his room becomes available from Berthold <The Doorman>, and all trash mobs from The Curator to Aran (exc. one pack outside Illhoof's door) cease to respawn.

Nielas Aran was the court conjurer of Stormwind, advisor to the throne and father and teacher of the sorcerer Medivh. Of all the mages, wizards, conjurers, and sorcerers, he had the most potential to protect and strengthen Medivh.

Nielas was a member of the Tirisgarde, a branch of the Order of Tirisfal, and was tasked with finding and capturing the wayward guardian, Aegwynn. Upon finally locating Aegwynn, Nielas hounded her for months; until they came to realize they both harbored similar opinions of the Council and its misdoings. Over time they fell in love and decided they must not allow the Council to name another Guardian. The two bore a child together, and named him Medivh. Nielas's natural affinity for magic would run deep within the child and define the tragic steps the child would later take. The power of Tirisfal was also implanted in the child, yet it wasn't to awaken until he reached physical maturity.

Aegwynn left the baby Medivh in the care of his father and his people at Stormwind Keep. On the eve of Medivh's Age of Ascension, Medivh awoke to fevered dreams, and sought his father. Upon merely touching the boy, a backlash of energies poured from the child, and only the combined powers of a hundred clerics and the Conjurer himself were able to properly contain him. Medivh and Nielas were locked in a magical trance for hours or possibly days, before, finally, they both collapsed. Nielas was dead, drained of all life, and Medivh was in a deep sleep.

The key to success here is survival. The Shade of Aran's basic attacks are not very dangerous, but the special attacks are deadly. Each raid member must pay attention to which attack is upcoming; nobody can sit back and just do their usual routine. Once everybody learns how to move (or when not to move), the fight actually becomes rather easy.

In order to avoid the Magnetic Pull/Arcane Explosion, everybody must run to the outer wall of the room; the Blizzard forces people towards the center (or the other side of the room); and Flame Wreath inhibits movement. Beyond this, casters want to stay outside the AoE silence, and classes with spell-interrupt abilities want to concentrate on what he's casting.