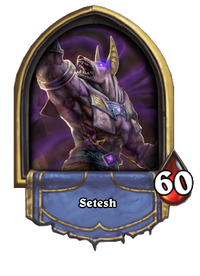 Setesh curses minions... Without even getting to know them first.

Setesh is a boss that can be encountered initially in Chapter 4 of Tombs of Terror. After completing Chapter 4, this boss encounter will be available in any completed chapter.

There is no chivalry in death, murloc.

Setesh
There is dark promise within you.

Setesh
All things end.
Did you expect to survive?
Do you understand now?
Meet your fate.
Wilt beneath my gaze.

Setesh
Chaos cannot be controlled.
To destroy is to protect. To protect is to destroy.

You value strength too highly.

I once controlled this plague… now it runs rampant.

Such rage in one so small!

An angry husk? How fitting.

An admirable act of destruction.

Setesh
You fear that which you cannot control. But can you control your fear?

Setesh - a titanic watcher - is a boss of the Halls of Origination in World of Warcraft: Cataclysm.

Setesh is one of the guardians of the Halls of Origination. Like the other constructs within the halls, Setesh was created to protect the powerful device capable of resetting all life on Azeroth. Each of the keepers has a sphere of influence. Isiset presides over magic; Setesh, chaos; Ammunae, life; and Rajh, the sun.
Given the purpose of the Halls of Origination, the titans deemed it necessary to create Setesh, a construct who holds sway over the powers of destruction. Should Setesh ever fall to corruption, the results would be disastrous.