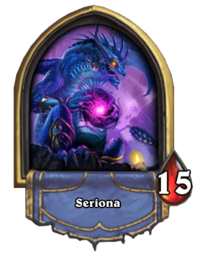 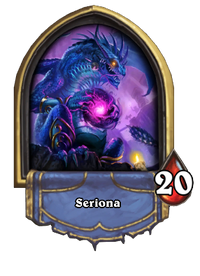 A twilight dragon bent on draining your minions.

Seriona is a boss that can be encountered during the Dungeon Run.

Seriona runs a Dragon Priest deck, which can pose a surprising threat with Duskbreaker and Blackwing Corruptor, on top of Flash Heal to effectively have up to 30 health. If the Duskbreakers and Corruptors show up ahead of time they can cause sudden swings in tempo that can be problematic, since the player's deck is relatively underdeveloped at this point in the run.

Play conservatively. Avoid expending your damage spells on her unless going for the win, because your resources will be effectively wasted with Flash Heal. Her Hero Power may be annoying as your minions are depowered, but it is rather inefficient and would not pose a great obstacle to a minion-based assault.

She has also has a lot of ways to deal with small minions such as Spirit Lash and Potion of Madness. Try dealing around these if you can.

Seriona
Embrace the twilight.
Feeeed...
My kind will perservere.
Your strength sustains me.

Come back to the fold, little one...

Little brother, do not betray us.

Seriona is unique to hearthstone. She is one of the last twilight dragons who wishes to bring the flight back.