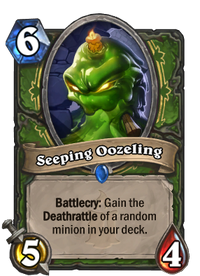 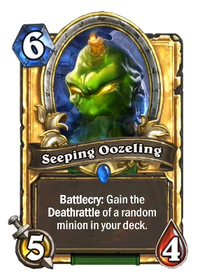 Battlecry: Gain the Deathrattle of a random minion in your deck.

Uh, you might want to get that looked at.

Seeping Oozeling is a rare hunter minion card, from the Kobolds & Catacombs set.

Seeping Oozeling can be obtained through Kobolds & Catacombs card packs, or through crafting.

This card can be used to gain extra uses out of your other minions' Deathrattle. To get the most value out of this, it's recommended you only include strong Deathrattle minions in your deck, such as Devilsaur Egg, Savannah Highmane, Violet Wurm, and Kathrena Winterwisp. Notably, Rat Pack and Sergeant Sally's Deathrattle will be much more efficient on this due to the effect scaling with stats.

In Wild, there are even more powerful Deathrattle effects to copy, namely Sylvanas Windrunner and Sneed's Old Shredder.