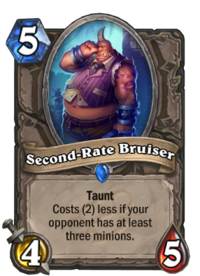 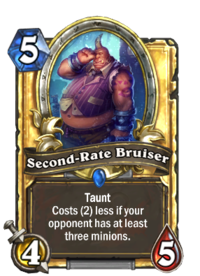 Taunt. Costs (2) less if your opponent has at least three minions.

He'll be a first-rate bruiser once he gets used to his contacts.

Second-Rate Bruiser is a rare neutral minion card, from the Mean Streets of Gadgetzan set.

Second-Rate Bruiser can be obtained through Mean Streets of Gadgetzan card packs, or through crafting.

A simple Taunt, its ability lies in the cost reduction of (2). Best played if your opponent has at least three minions on the board, but if you need a desperate Taunt, you can play it, like Dread Corsair. This card is more effective against zoo-type decks which can more easily activate its cost reduction.

This card combos well with Cornered Sentry, which activates its condition on its own.