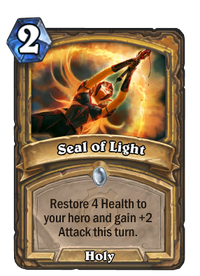 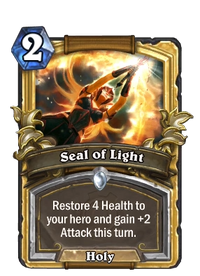 Restore 4 Health to your hero and gain +2 Attack this turn.

Seal of Light is a common paladin spell card, from the Goblins vs Gnomes set.

Seal of Light can be obtained through Goblins vs Gnomes card packs, or through crafting.

Seal of Light can be considered as a reverse, single use Truesilver Champion, decent for removing early threats against aggro decks.

Seals are paladin self-buff spells that fill the paladin with Holy Light, causing a variety of effects depending on the choice of seal, usually related to melee attacks. Seal of Light originally gave melee attacks a chance to heal the paladin, but was replaced in World of Warcraft: Cataclysm with Seal of Insight, which healed the paladin as well as increasing overall healing ability. With World of Warcraft: Legion Seal of Light was re-added with a completely different effect, increasing the paladin's movement speed.