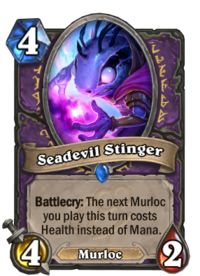 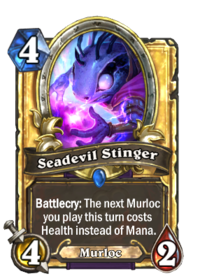 Battlecry: The next Murloc you play this turn costs Health instead of Mana.

Pretty harmless unless you're a Seadevil.

Seadevil Stinger is a rare warlock minion card, from the Mean Streets of Gadgetzan set.

Seadevil Stinger can be obtained through Mean Streets of Gadgetzan card packs bought through the ingame Shop, purchased online from the Battle.net shop, or through crafting.

This card is a strong addition to murloc-based decks. By summoning another murloc without being subject to the mana curve, it helps Warlocks swarm their board more easily. Its effect is best reserved for expensive Murlocs like Finja or Corrupted Seer.