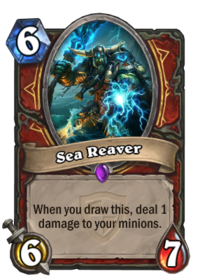 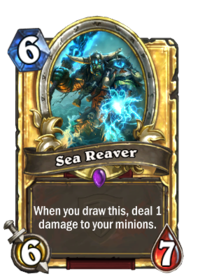 When you draw this, deal 1 damage to your minions.

A little better than Sea Minus Reaver.

Sea Reaver is an epic warrior minion card, from the Grand Tournament set.

Sea Reaver can be obtained through The Grand Tournament card packs, or through crafting.

This is a Boulderfist Ogre for warriors that help many of the warrior cards that need his minions damaged to use, Such as Rampage and Battle Rage as well as enrage minions and Minions that trigger based on damage (Acolyte of Pain, Frothing Berserker, ect). Best used in a deck that works off this theme as you cannot control when the effect goes off.

On draw
Reaving time!
Summon
The seas belong to us!
Attack
You will drown!

The art for this card specifically depicts Drottinn Hrothgar.

Drottinn Hrothgar is a level 79 kvaldir raider who has claimed Hrothgar's Landing from the local tuskarr.

Sea Reaver was voiced by , who also voiced The Mistcaller, Mukla's Champion and Spawn of Shadows. 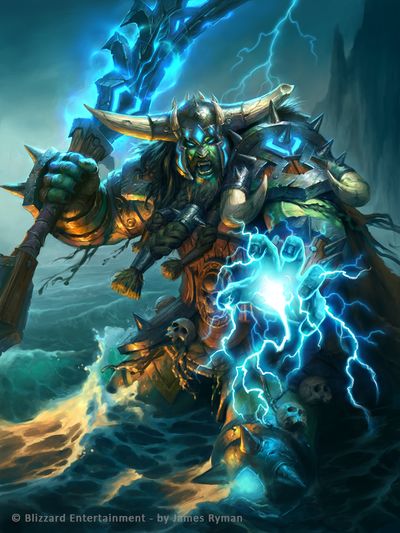