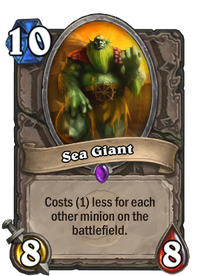 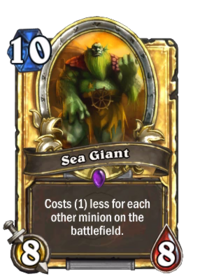 Costs (1) less for each other minion on the battlefield.

Sea Giant is an epic neutral minion card, from the Classic set.

The Sea Giant works excellently in decks that focus primarily on getting many minions out onto the field quickly, as that allows the Sea Giant to rapidly enter the field. A good example is a warlock or shaman Murloc rush deck.

Similarly, the Sea Giant can be useful in situations where your opponent has a lot of (cheap) minions on the board, with its efficient mana cost potentially turning the tide of the game.

Titans created the gentle, aquatic sea giants to dredge the oceans and to serve as guardians of Azeroth’s coastlines and oceans, and the fierce giants act as protectors of the waters even now. They keep a wary eye on ships and upon those who make their living on the ocean, such as fisherfolk. While not evil creatures, sea giants care nothing for the laws of land dwellers or the lives of the small beings that trespass in the waves.

Lord Arkkoroc was a level 60 sea giant quest giver located in the Temple of Arkkoran in the contested territory of Azshara. Loramus Thalipedes described him as a lesser deity, and his sons, the sea giants, patrolled around the temple. Many of Lord Arkkoroc's sons were slain by the hydra Hetaera, and he sought revenge.

Following the Cataclysm, Arkkoroc was apparently slain by the local naga, who are using his heart to control his sons. 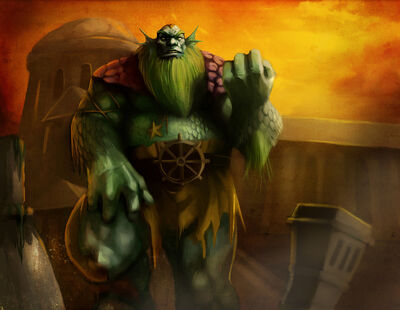