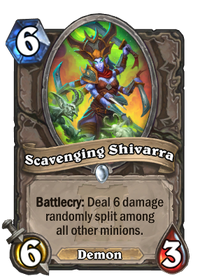 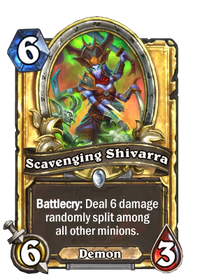 Battlecry: Deal 6 damage randomly split among all other minions.

Say what you want but finding a matching set of six swords takes commitment.

Scavenging Shivarra is a common neutral minion card, from the Ashes of Outland set.

Scavenging Shivarra can be obtained through Ashes of Outland card packs, through crafting, or as an Arena reward.

A good card for Control decks. Played while you control no minions, Scavenging Shivarra can deal with a board of small minions, or one medium minion up to 6 health.

Another use for this card is triggering friendly Deathrattles, such as Serpent Egg or Carnivorous Cube.

Summon
Don't worry, I brought enough for everyone.
Attack
Dance for me!