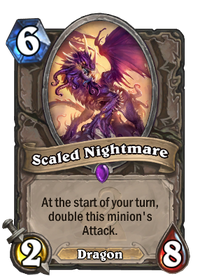 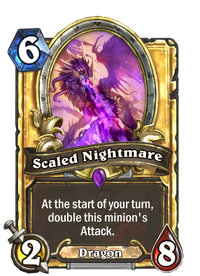 At the start of your turn, double this minion's Attack.

Scaled Nightmare is an epic neutral minion card, from the Whispers of the Old Gods set.

Scaled Nightmare can be obtained through Whispers of the Old Gods card packs, or through crafting.

Scaled Nightmare's measly 2 Attack gives it low value for its cost when first played, and without anything to increase its Attack, a 4/8 for 6 Mana on the next turn is still weak. Therefore, you will need to utilize buffs in order to take advantage of its effect and make it worth its cost.

Paladins can easily buff Scaled Nightmare's Attack. Playing a Blessing of Might on the same turn would increase its Attack to 5, improving its stats just enough to be a bit more viable. If it survives the next turn, you have a 10/8 on your board. Combine it with a Blessed Champion to double its Attack to 20 and you have yourself a beefy minion with which to deal massive damage to the face.

Rogues can also take advantage of Scaled Nightmare's effect. With Cold Blood, they can turn it into a 6/8 minion for 8 Mana. While Rogues can't give it a burst of attack on the next turn like Paladins can, they are able to utilize Stealth to protect it, giving them a 12/8 to work with on the next turn.

Lastly, Priests can simply use Inner Fire to make it an 8/8 up front, making it a fast and effective way to give it value. If combined with Divine Spirit, it turns into a 16/16, giving them an absurdly powerful minion for 9 Mana. On the next turn, it will have 32 Attack, allowing the Priest to win the game if their opponent does not deal with it immediately.

This dragon has been corrupted by the Old Gods, or, more specifically, the Emerald Nightmare.

The Emerald Nightmare (or the Nightmare for short) is a mobile area of corruption within the Emerald Dream.

During the War against the Nightmare, it was revealed that the Emerald Nightmare was under the rule of a figure known as the Nightmare Lord, who in fact was really Malfurion Stormrage's old nemesis Xavius. However, it was also revealed that Xavius himself was a minion of a powerful yet ancient evil, residing in the Rift of Aln, and possibly also beneath Azeroth's oceans.

The origins of the Nightmare stretch back to 4,500 years before the First War. Fandral Staghelm took branches from Nordrassil, the World Tree, and planted them over saronite that had begun to appear across the world, including a particularly large source of saronite in the Grizzly Hills. Unfortunately, its roots went deep enough that they touched the prison of the Old God Yogg-Saron, corrupting the tree and spreading madness throughout the nearby wildlife. The druids sorrowfully destroyed the world tree, believing that this act would halt Yogg-Saron's corruption. What they did not know, however, was that Yogg-Saron had used the world tree to spread his corruption into the Emerald Dream itself. 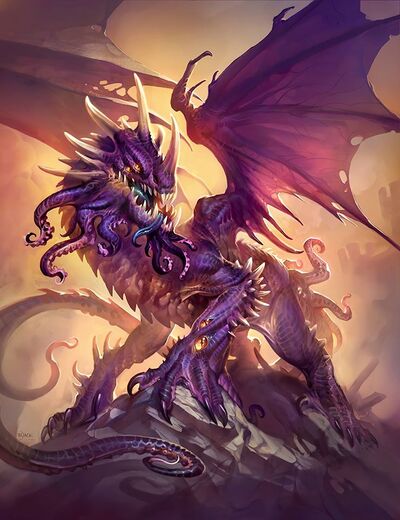