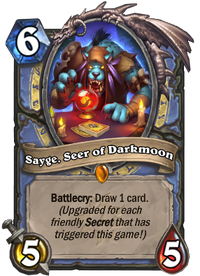 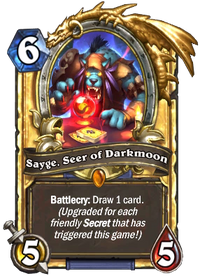 Battlecry: Draw 1 card.
(Upgraded for each friendly Secret that has triggered this game!)

There are no secrets between us... or refunds.

Sayge, Seer of Darkmoon is a legendary mage minion card, from the Madness at the Darkmoon Faire set.

Sayge, Seer of Darkmoon can be obtained through Madness at the Darkmoon Faire card packs, through crafting, or as an Arena reward.

Sayge provides card draw while putting a reasonable sized body in play, allowing you to refill your hand while still putting pressure in your opponent. Since its effect becomes more powerful the more secrets you play, Sayge requires you to build your deck in a specific way to make him truly useful. He naturally fits into Secret Mage, but can be played in Highlander Mage, Control Mage, or any mage deck that expects to have a few Secrets trigger.

In Wild, Sayge can be a good alternative to Aluneth, as one of the mage's most powerful tools to quickly refill your hand and find ways to close out games. Unlike Aluneth, Sayge provides immediate value, and doesn't risk overdraw or fatigue if left in play.

Summon
What once was cloudy shall become clear.
Attack
A fickle fate!

Sayge is a level 55 buff vendor (free) and quest giver associated with the Darkmoon Faire.

Sayge is one of the few gnolls that are not hostile. Asides from being neutral he has also been able to learn to speak full Common. Silas Darkmoon especially values Sayge as a clairvoyant and considers him one of the best he's ever seen.

A new game called Whack-a-Gnoll was introduced on Darkmoon Island and is quite popular with the other carnies, but Sayge (for obvious reasons) isn't too fond of it. 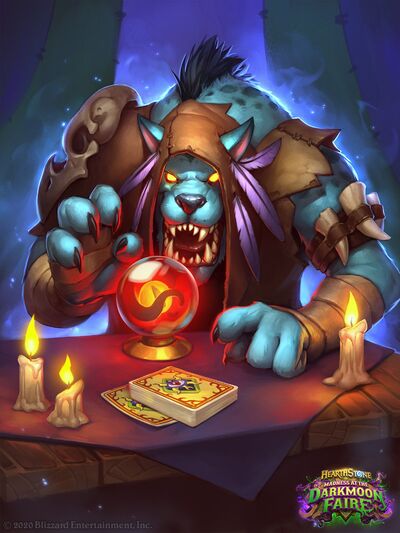