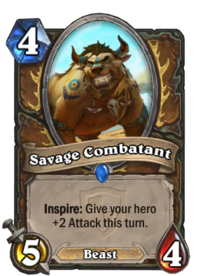 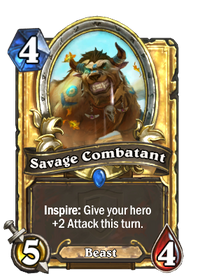 Inspire: Give your hero +2 Attack this turn.

Maybe if you whistle a tune it will soothe him. Yeah... Try that.

Savage Combatant is a rare druid minion card, from the Grand Tournament set.

Savage Combatant can be obtained through The Grand Tournament card packs, or through crafting.

This card's Inspire is useful for allowing your hero to attack, without needing a weapon. However, if attacking minions, be aware that regular use of this ability will likely result in a substantial amount of damage taken by your hero.

If wishing to avoid damage, this card can be used to attack the enemy hero directly (Taunts permitting), with a comparable effect to Steady Shot.

Because its Inspire can be activated the same turn it is played, this card can serve as a form of removal, even if the minion itself is destroyed the next turn. However, this will require extra mana to use the Hero Power.

Based on its horns, tattoos and jewelry, Savage Combatant is a tauren druid in bear form.