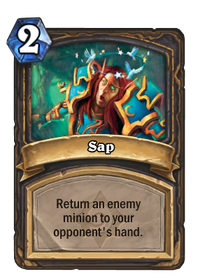 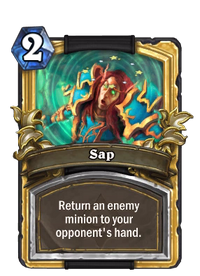 Return an enemy minion to your opponent's hand.

Sap is a rogue spell card, from the Basic set.

Two copies of Sap are automatically included in all players' collections upon unlocking the rogue class.

Two Golden copies of Sap are a reward for raising a rogue to levels 40 and 42.

Sap is uncraftable and cannot be crafted or disenchanted.

At face value, Sap trades 1 card advantage for additional tempo by forcing your opponent to spend mana to play their minion again, while doing nothing to prevent them from immediately doing so. However, creative use of Sap can generate significant card advantage and effectively counter many strategies. Also, because of its low mana cost, Sap can be very useful for Combos.

In general, Sap is best used after the opponent has spent several turns "buffing" up a character with enchantments. In an emergency, it can also be used to trade card advantage for survival by removing a dangerous minion from the board for a turn if you have nothing else to counter it with, but this is not the ideal use of the card.

Sap should not normally be used on enemy minions with a beneficial Battlecry as your opponent will then be able to take advantage of it once again. However, if the Battlecry is harmful to your opponent, such as with several warlock minions, Sap will force them to suffer the negative effects a second time if they wish to play the card again.

Note that while returning a minion to the hand will remove all enchantments, permanent effects and transformations will not be undone; Sapping a Faceless Manipulator will not return it to its original form, but merely place the current version into the player's hand.

As each player's hand has a maximum of 10 cards, if the opponent already has 9 cards in their hand, returning a minion to it will cause their hand to become full, meaning that the next card they draw will be instantly destroyed. This can be used to prevent the opponent from gaining additional card advantage, or simply to negate the loss of card advantage for the rogue from playing Sap.

When playing against a mage, Sap is one of the weaker cards in your toolkit. Mages seldom buff their minions to a significant degree and the minions that do typically receive buffs (Mana Wyrm and Amani Berserker) are both very inexpensive to play. Sap can be an effective counter for a mage deck built around secrets, particularly through its ability to dispel buffs on an Ethereal Arcanist, but be cautious of Counterspell or Spellbender.

When playing against a warlock, Sap can be a very effective counter for cards that are penalizing to play. If your opponent has a significant number of cards in their hand, using Sap on a Felstalker or Doomguard will force your opponent to discard even more cards to keep their minion in play, providing you a means to build card advantage in addition to its tempo effects.

Sap can also be used to inflict extra damage on your opponent when used against Flame Imp or Pit Lord, forcing your opponent to spend the Health to play them a second time. If your opponent is at low Health, this may even effectively remove the minions from the game as your opponent will not play them if doing so would be fatal or would give you lethal.

Finally, Sap can be a very effective counter against an early-game Void Terror, by erasing the buffs provided by the minions sacrificed to buff it. While the warlock will be able to replay the Void Terror itself, the destroyed minions will have been sacrificed in vain.

Sap is a rogue ability from World of Warcraft that incapacitates a target for up to 1 minute. Sap can only be used while the rogue is stealthed, and any damage to the target will break Sap, making it useful as a form of preemptive crowd control, allowing the player to focus their attacks on another target. 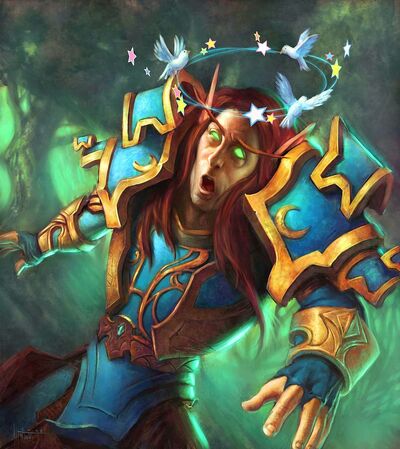