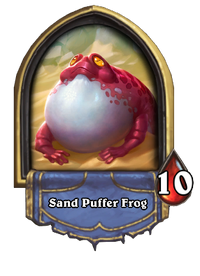 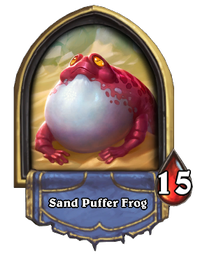 One puff's enough to bluff a minion's stuff.

Sand Puffer Frog is a boss that can be encountered initially in Chapter 1 of Tombs of Terror. After completing Chapter 1, this boss encounter will be available in any completed chapter.

This boss is pretty easy either on Normal and Heroic difficulty. Effect of his hero power doesn't give an advantage because it's an early stage with quick fights and there are no dangerous minions in his decks that can be threating with Stealth. It is pretty safe to attack only face and leave the board control for the enemy in this encounter. Also, it becomes even easier with Band of Scarabs passive.

Elise Starseeker
This is the cutest thing that has tried to kill me thus far.