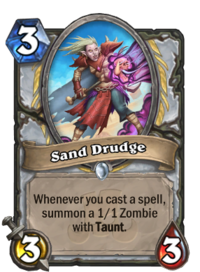 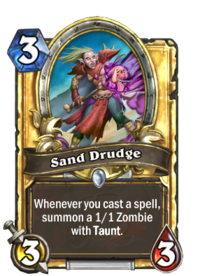 Whenever you cast a spell, summon a 1/1 Zombie with Taunt.

Loves long walks on the beach, raising the dead, and chocolates.

Sand Drudge is a common priest minion card, from the Rastakhan's Rumble set.

Sand Drudge can be obtained through Rastakhan's Rumble card packs, or through crafting. 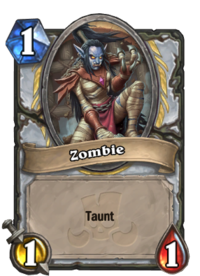 Based on its name, this seemingly undead troll appears to be a sand troll of the Farraki tribe.

The Farraki tribe or the Sandfury tribe (sometimes spelled Sand Fury), originally known as the Razorbranch tribe, is a tribe of sand trolls, located in the deserts of Southern Kalimdor.

Prior to the War of the Ancients, the Razorbranch tribe was originally part of the Gurubashi empire, living on the fringes of the empire. The Sundering shattered the jungle trolls' territory and isolated the Razorbranch, leaving them stranded in the middle of what swiftly became the desert of Tanaris. The relentless desert sun of Tanaris beat down on the trolls, who gradually adapted to their harsh new environment, becoming sand trolls, now known as the Sandfury tribe. Today they bear only a rough resemblance to the jungle trolls from whom they are descended.

The capital of the Sandfury is the troll city of Zul'Farrak, but they have few other remaining settlements. Tanaris has long since reclaimed them, leaving it dotted with buried ruins. Since the Sundering, the sand trolls have been forced to give up the majority of Tanaris to outsiders, and are thus fierce to defend what remains of their lands.

The Sandfury need every troll to pitch in just to scrape by, so they learned to raise the dead with voodoo so every troll could continue working even after death.