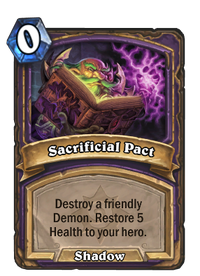 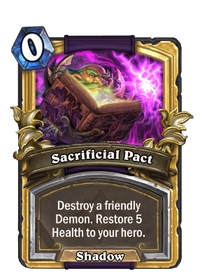 Destroy a friendly Demon. Restore 5 Health to your hero.

This is the reason that Demons never really become friends with Warlocks.

Sacrificial Pact is a warlock spell card, from the Basic set.

Two copies of Sacrificial Pact are a reward for raising a warlock to level 8.

Two Golden copies of Sacrificial Pact are a reward for raising a warlock to levels 15 and 20.

Sacrificial Pact is uncraftable and cannot be crafted or disenchanted.

Sacrificial Pact gives Warlocks healing, a valuable resource to Warlocks, for the price of a demon. Ideally, it should target a puny 1/1 imp or a dying minion, such as one affected by Power Overwhelming. Another excellent target is a deathrattle minion. Although healing is useful, unless you have convenient ways to generate small inconsequential demons to sacrifice, such as Dreadsteed or Galakrond, the Wretched, it's cumbersome to use and its lack of influence on the board makes it a poor card to include in most decks.

In World of Warcraft, Sacrificial Pact is a talented ability that allows warlocks to sacrifice a portion of their minion's health to create a temporary shield for themselves.

The unusual relationship between warlocks and their summoned demons is well-documented.

Warlocks command the obedience of mighty demons, summoning and dismissing them at will, using them as they see fit and sacrificing them the moment it serves the warlock's interests. Even the mighty infernals bow before the will of the warlock. 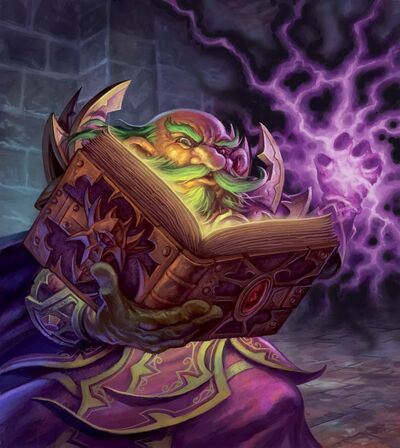